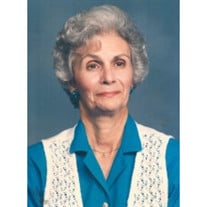 Alice Patronella, 87, of Groves left this earth after many years of decline due to Alzheimers disease on Thursday, December 26, 2019 at Briarcliff Nursing Home in Carthage, Texas. She is now with her Heavenly Father, beloved husband, and all her relatives and friends that passed. She was born May 30, 1932 in Port Arthur, Texas to Joseph D. Dumatrait and Inez Borel Dumatrait. Alice had lived in Groves for 63 years and was a member of Immaculate Conception Catholic Church. She was a retired bookkeeper and over the years had been employed with Bruces Market Basket, Texaco Credit Union, Retail Merchants Association and in her later years, a caregiver to the elderly. A visitation for family and friends will be Sunday evening at Levingston Funeral Home in Groves from 5:00 to 7:00 p.m. with a rosary service to begin at 6:00 p.m. A Mass of Christian Burial will be held at 1:00 p.m., Monday, December 30, 2019 at Immaculate Conception Catholic Church in Groves with Monsignor Kenneth Greig and Reverend Reggie George officiating. Burial will follow in Greenlawn Memorial Park. Alice was preceded in death by her husband, Pat J. Patronella, brother, Gene Dumatrait, sisters, Mary Joyce Moore and Shirley Fontenot, and son-in-law, Douglas McCorkle. She is survived by three daughters, Debbie Peck and husband Jerry of Keatchie, LA, Denise McCorkle of Bridge City, TX, and Roxanne Verde and husband Paul of Kissimmee, FL, son, Patrick Wayne Patronella and wife Bonnie of Groves, TX, sisters, Jo Ann Pace of Temple, TX, and Linda Johnson and husband Leonard of Port Arthur, TX, nine beloved grandchildren, fourteen great grandchildren and one great great grandchild. The family would like to express their gratitude to the staffs of Briarcliff Nursing Home and Angel Care Hospice, who often spoke of Moms contagious smile.

Alice Patronella, 87, of Groves left this earth after many years of decline due to Alzheimers disease on Thursday, December 26, 2019 at Briarcliff Nursing Home in Carthage, Texas. She is now with her Heavenly Father, beloved husband, and all... View Obituary & Service Information

The family of Alice Patronella created this Life Tributes page to make it easy to share your memories.

Alice Patronella, 87, of Groves left this earth after many years...

Send flowers to the Patronella family.