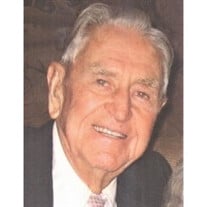 Born in Port Arthur, Texas, on June 11, 1928, Allan Sidney Dearing was the youngest of Willis H. Dearing and Ivy Block Dearing's 15 children. Allan spent the first 20 years of his life on the family's dairy farm where he acquired a fierce work ethic that pervaded the rest of his life. That work ethic was his legacy, passed on to his children, and to his son-in-laws and grandchildren as well. Allan's career spanned 35 years during which he successfully worked his way up at Great Lakes Carbon from welder's helper to the overall plant production manager through hard work and an innate ability to understand all things mechanical. During this period, Allan built his family two homes and several beach houses, often working with only his young sons as helpers. He also served as work crew supervisor of a team of volunteers who set out to gut and rebuild the sanctuary of Groves Church of the Nazarene in the late 1960s. Allan was a natural leader among men, and no one worked harder than he did. Retirement did not slow him down. Allan's great passion was fishing, and he was among the lucky few to turn his hobby into a profitable business. After he secured a commercial license, he spent his best years deep sea fishing offshore, and his hauls were so significant that he became a regular supplier to area restaurants. When age began to limit his ability to deep sea fish, Allan was content to fish in the lake or the river near his home. He also dillagently plowed and planted gardens and shared his crops with family and neighbors. He was preceded in death by his wife of 52 years, Rosemarie Hamm Dearing. The two of them left hundreds of wonderful memories for their grandchildren of cruises to the Bahamas and Alaska as well as trips to Hawaii and Disney World. Spoiling grandchildren was something at which they both excelled. At a chance meeting at an eye doctors office Allan found Peggy Mouton. Overcoming visual and hearing restrictions , Allan found a loving companion for his twilight years including her robust extended family. Love and caring were their foundation. Allan passed away on Saturday, December 19, 2020, at age 92. He is survived by his wife of 14 years, Peggy Mouton Dearing; two sons Sidney Dearing and wife Connie of Spring and Jerry Dearing of Houston; daughters Anne Pollock and husband Russell of Kingwood and Jan Dearing of Beaumont; 11 devoted grandchildren and numerous great-grandchildren. A memorial service for family and friends will be 10:00 a.m. Saturday, January 30, 2021 at Levingston Funeral Home in Groves. " In lieu of Flowers, Please consider donating to " Coastal Conservation Texas." Please send checks to CCA Texas, 6919 Portwest Dr. Ste 100, Houston Tx 77024. In Memory of Allan Dearing, CCA Building Conservation Trust.

Born in Port Arthur, Texas, on June 11, 1928, Allan Sidney Dearing was the youngest of Willis H. Dearing and Ivy Block Dearing's 15 children. Allan spent the first 20 years of his life on the family's dairy farm where he acquired a fierce work... View Obituary & Service Information

The family of Allan Sidney Dearing created this Life Tributes page to make it easy to share your memories.

Send flowers to the Dearing family.