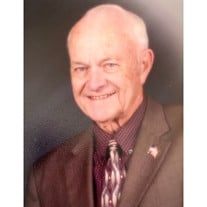 Angus Edward Lunceford, 84, of Groves, Texas, passed away peacefully at his home surrounded by his loving family on Wednesday, August 4, 2021. He was born in Canton, Texas, on September 24, 1936, to Garland Lunceford and Velma Sledge Lunceford. Angus was a long-time resident of Groves, and retired from DuPont Beaumont Works as a unit supervisor in 1995 after almost 33 years. He also served four years in the Army National Guard. His greatest work was in the kingdom of Jesus. He was a member of the West Groves church of Christ, raised his family to know the Lord, and he served first as a deacon and later as an elder in the Lord's church for many years. A visitation for family and friends will be held on Friday, August 6, 2021, from 10:00 a.m. to 12:00 p.m. with a memorial service to follow at 12:00 p.m. at Levingston Funeral Home in Groves. He is preceded in death by his parents as well as his siblings, Charles Lunceford, Doug Lunceford, David Lunceford, Rose Patterson and Joyce Ashley. Those left to cherish his memory are his wife of 61 years, Sandra Smith Lunceford of Groves, son Mark Lunceford and wife Regina of Port Neches, daughter Brenda Cimino and husband Jon of Port Neches; grandchildren Traci Smith, Aaron Lunceford and wife Megan, Cory Lunceford and wife Sabrina, Hannah Lunceford, Samantha Lunceford, Greg Lunceford and wife Kori, Ryanne Lunceford, MaryGrace Lunceford and fiancé Cullen Cauley, Abby Lunceford, Shannon Lunceford, and Kyler Cimino; and great-grandchildren Tyler, Rachael and Rebecca Smith; Braelyn and Bohan Lunceford; Penelope Robles; Kaiden and Kristopher Lunceford; Marley, Lillian and Grady Lunceford. His family was his pride and joy. He was the sweetest, kindest man, always more than willing to lend a hand to anyone. He was always there for family and friends. If there was a project going on, home improvement, repair or whatever, he was there to help in whatever way he could. And he could help in most any way...whether it be any type of construction, electrical, mechanical, plumbing, automotive...he could do most anything. He wasn't formally trained in all these trades...he knew how to do them because he taught himself or learned at the hands of a friend or relative. He enjoyed working with his hands. In his retirement, he enjoyed doing handyman jobs for friends...free, of course. One of his joys in retirement was spending time at his property in East Texas, near where he was born, which also allowed him to spend more time with his brother, David, than he had been able to do in previous years. Angus was a proud and devoted PNG Indian fan, holding football season tickets for approximately 55 years and attending hundreds of games. He attended many games to watch his grandchildren play football, basketball, volleyball, softball, and baseball, as well as band concerts and events. Dad, we are confident that today you truly are "doing pretty good for an old man." We miss you so much, and we love you...more! Many special thanks to our wonderful caregivers Sandra, Geneva, Fatima, Jessie and Stephanie, as well as to Jana and the team of nurses and aides at Heart to Heart Hospice, for your love, dedication and patience in caring for our dad and mom over the last ten months.

Angus Edward Lunceford, 84, of Groves, Texas, passed away peacefully at his home surrounded by his loving family on Wednesday, August 4, 2021. He was born in Canton, Texas, on September 24, 1936, to Garland Lunceford and Velma Sledge Lunceford. Angus... View Obituary & Service Information

The family of Angus Edward Lunceford created this Life Tributes page to make it easy to share your memories.

Send flowers to the Lunceford family.