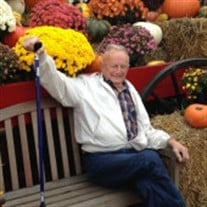 Aubrey Harrison Felder, a lifelong resident of Port Neches, Texas, passed away Saturday morning at his home while surrounded by his loving family. Born April 26, 1925 to Albert Rene Felder and Laura Wilson Felder, Aubrey spent all of his nearly 95 years in Port Neches. The only exception was his three years of U.S Navy service in the Pacific theater during World War II aboard the escort aircraft carrier U.S.S. Kadashan Bay. His innate love for, and skill with, complex machinery made him a natural at servicing and repairing the carriers aircraft compliment - skills and experience he would put to great use when he returned home. After his discharge from the Navy, he returned to Port Neches and married Evelyn Holstead Felder. They made their home at 1530 Llano and raised three devoted children - Kay, Chris, and Bill. Aubrey was a member of the First United Methodist Church of Port Neches and the VFW. Aubrey was an avid outdoorsman and was active with Boy Scout Troop 51 in Port Neches - both as an Eagle Scout himself and troop scoutmaster for many years. In the 1960s, Aubrey was a founding member of the Port Neches Boat Club where he organized and raced for a boat racing team called the "Roostertails". Aubreys mechanical skill allowed him to excel professionally - he spent many years as an adjuster for Transamerica Insurance Company then worked for the Port Neches Groves Independent School District, where he retired as Director of Maintenance. In 2003 he married Kathleen McCoy who lovingly stood by his side for the last 17 years of his life and served him even more devotedly in his last few months. Aubrey is preceded in death by his parents and his sister Margaret Felder, and his first wife of 36 years, Evelyn. Aubrey is survived by wife, Kathleen McCoy Felder of Port Neches, his daughter Kay Minyard and her husband Randy of Kingwood, his daughter Chris Atkins and her husband Jack of Wildwood, his son Bill and his wife Jodie of Kingwood, and his step-daughter Karen Bellows and her husband Bob of Groves. Aubrey is also survived by seven grandchildren - Brian Minyard of Houston, Brady Minyard of Cedar Park, Jason Atkins of Houston, Alaina Fournier of Lake Forest, Ross Felder of El Paso, Laura Felder of Houston, and Amy Felder of Kingwood - and eight great grandchildren. Aubreys family would like to thank Trinette Rose and her many skilled health care workers for the wonderful support provided to Aubrey during his last few months. A visitation for family and friends will be Monday, February 24, 2020 from 1:30 p.m. to 3:30 p.m. at Levingston Funeral Home in Port Neches with a military graveside service to follow in Oak Bluff Memorial Park. In lieu of flowers, the family requests that friends wishing to make a memorial contribution send them to First United Methodist Church of Port Neches Building Repair Fund to fund the restoration of the Boy Scout Troop 51 Scout Hut.

Aubrey Harrison Felder, a lifelong resident of Port Neches, Texas, passed away Saturday morning at his home while surrounded by his loving family. Born April 26, 1925 to Albert Rene Felder and Laura Wilson Felder, Aubrey spent all of his... View Obituary & Service Information

The family of Aubrey Harrison Felder created this Life Tributes page to make it easy to share your memories.

Send flowers to the Felder family.