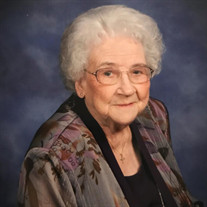 Audie Laverne Flowers Todd, 97, passed away peacefully as she slept on Saturday, February 5, 2022, surrounded by her family. She was born on July 21, 1924, in Indian Springs, Mississippi. She was preceded in death by her parents, Johnny Herman and Lois Nicholson Flowers; brothers, Johnny H. Flowers Jr., Edgar Flowers, and James Arnold Flowers; and sisters, Ila Mae Flowers, Kay Flowers Lattin, and Faye Flowers Hendry. She is survived by her devoted husband of 75 years, Benny Harold Todd; three children, Margaret Todd Fails(Arvin), Johnny Todd (Annette), and Marlyn Todd Trahan (Charlie); seven grandchildren, Gary Fails (Heidi), Toby Fails (Lisa), Niki Fails, Amanda Richards Jackson (Henry), Ashley Todd (Beth), Adam Todd (Lauren), and Ryan Trahan (Skylar), and fourteen great-grandchildren, Maccie Hardin, Peyton Fails, Olivia Fails, Kylie Fails, Maggie Fails, Trevor Benson, Alexis Todd, Adyn Todd, Adyson Todd, Asher Todd, Ben Crenshaw, Desi Todd, Benny Todd, and Harper Trahan; sisters, Tommie Jean Fairchild and Bobbie Lois Flowers, along with dozens of nieces and nephews. Miss Audie, as she was affectionately known throughout First Baptist Church Groves, was a dedicated, 70-year member, who served in so many capacities. She chaired the Vacation Bible School committee for the majority of those 70 years. She served as the Director of the Women on Missions Union and the church appropriately named the Direct Missions Offering after her, thus the Audie Todd Direct Missions Offering. In addition, until recent years, she could be found demonstrating her cooking skills and serving supper on Wednesday nights in the church kitchen. She truly possessed a servant’s heart. A woman of quiet nature, many never knew of some of the adventures she encountered in life. She grew up on a farm in rural Mississippi. She spent a lot of time helping her mother cook and care for her younger siblings, yet when World War II came along, she found that her country had a need for her skills, so she moved to Mobile, Alabama and became a “Rosie the Riveter.” A true prayer warrior, she was a woman of small stature, but big on Jesus. Anytime any one of her grandchildren had a challenge coming up, whether it was team tryouts, a test in school, or a job interview, their first reaction was to call home and say, “Get Mawmaw to pray.” They all knew she had a direct line and if she said she was going to pray for you, it was as good as done. The power of prayer was known and acknowledged in the Todd home. Funeral services will be held at 2:00 p.m. on Tuesday, February 8, 2022, at First Baptist Church Groves. Officiating will be Dr. Joe Worley and Reverend Charles Miller. Burial will follow at Greenlawn Memorial Park in Groves. Visitation will be held prior to the service, beginning at 1:00 p.m., at First Baptist Church Groves. The family would like to express their appreciation to Cindy Flowers, Sophia Davis, and Texas Home Health for the wonderful, loving care they provided these last few months. In lieu of flowers, donation may be made to the First Missions Offering, First Baptist Church Groves, 4000 Grant Avenue, Groves, Texas 77619.

Audie Laverne Flowers Todd, 97, passed away peacefully as she slept on Saturday, February 5, 2022, surrounded by her family. She was born on July 21, 1924, in Indian Springs, Mississippi. She was preceded in death by her parents, Johnny Herman... View Obituary & Service Information

The family of Mrs. Audie Flowers Todd created this Life Tributes page to make it easy to share your memories.

Audie Laverne Flowers Todd, 97, passed away peacefully as she...

Send flowers to the Todd family.