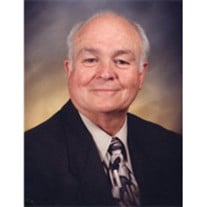 Charles "Elton" Jones went to be with the Lord on March 2, 2021 at the age of 91. He was born in Jefferson County, Texas on January 26, 1930 to Vana Elton Jones and Eunice May Sims Jones and was an only child. Elton graduated from PNG (although back in the day it was just PN High School). He is one of the last surviving members of the 1946 football team that is the only team from PNG to have an undefeated season - back then they just went to Regional finals. After high school he enlisted in the Army where he was a Paratrooper and Sharpshooter and later received an Honorable Discharge. He fell in love with Geneva Bertrand and on February 7, 1951 they were married. He went to work for Texas-US Chemical (later it would become Ameripol-Synpol) and worked his way up to Shift Supervisor before retiring January 31st of 1990 with 39 years of service. Elton and Geneva joined First Baptist Church in Port Neches where they were faithful members for many decades. Elton was a Deacon and served on numerous committees. Later they would move their letter to First Baptist Groves. He was preceded in death by his parents. He is survived by his wife Geneva of 70 years. One son Brad Elton Jones and wife Gail of Groves. One daughter Valerie Lynn Salabor and husband Ed of Longview, Texas. Three granddaughters, Katie Landry and husband James of Bridge City, Texas, Sarah Graham and husband Travis of Henderson, Texas, and Amanda Keith and husband Kyle of Houston, Texas and two great grandsons, Cole Landry and Kline Keith and one great granddaughter, Katherine Keith. A graveside service will be held Thursday, March 4, 2021 at 2:00 p.m. at Oak Bluff Memorial Park with cousin, Reverend Lynn Sasser officiating under the direction of Levingston Funeral Home Port Neches. A special thanks to the nurses on the second floor at St. E, to Jessa Walton, Jessica Irwin and the nurses at Harbor Hospice and finally to Allie and Erica who took care of him for the last few months of his life. Memorial contributions may be made to First Baptist Church Groves.

Charles "Elton" Jones went to be with the Lord on March 2, 2021 at the age of 91. He was born in Jefferson County, Texas on January 26, 1930 to Vana Elton Jones and Eunice May Sims Jones and was an only child. Elton graduated from PNG... View Obituary & Service Information

The family of Charles Elton Jones created this Life Tributes page to make it easy to share your memories.

Send flowers to the Jones family.