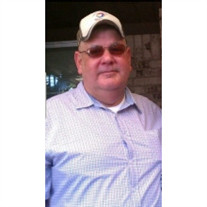 Dale Anthony Granger, 60, of Houston, Texas passed away Sunday, August 25, 2019 at Ben Taub Hospital. He was born October 7, 1958 in Port Arthur, Texas to Harris Granger and Eursula Suire Granger. Dale was the owner of Grangers Wrecker Service for over 13 years before retiring and moving to Houston. Prior to owning the wrecker service he was an EMT for 16 years. His greatest past time was being a big fan of the LSU Tigers. A visitation for family and friends will begin at 5:00 p.m., Saturday, August 31, 2019 at Levingston Funeral Home in Groves followed by the memorial service at 6:00 p.m. Dale is survived by his two daughters, Dakota Jean Granger and Megan Ebbie Granger both of Port Arthur; son, Shawn Dale Graham of Houston; sisters, Betty Frederick and Jan Granger both of Houma, LA, and Brenda Hebert of Port Arthur; brother, Darryll Granger of Houma, LA; six grandchildren, Madilyne Graham, Connor Granger, Maverick Washington Granger, Jagger Granger, Ethan Graham, and Kameron Bowling. He was preceded in death by his parents; and brother, Raymond Glynn Granger.

The family of Dale Anthony Granger created this Life Tributes page to make it easy to share your memories.

Send flowers to the Granger family.