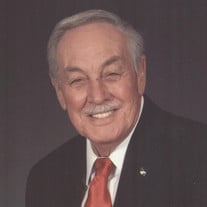 Donald Roy Gil, 88, of Groves, died Sunday, April 17, 2022. He was born September 27, 1933 in Port Arthur Texas to Henry & Bernice Gil. He is survived by his wife Jewel Gil, sons Mike and wife Debbie Gil, Russell and wife Amy Gil, all of Groves. His grandchildren include Jacob Gil of Groves, Aubrey Gil of San Marcos & Annie Gil of Galveston. Additional survivors include his brother Pete Gil of Port Arthur along with a host of cousins and nieces and nephews. This obituary would not be complete without listing his beloved and constant companion Schatzy II. He was preceded in death by his parents Henry and Bernice Gil and Sister in Law Linda Gil. In addition his in laws G.B. and Jewel Graham, Raymond, R.C. and Ronald Graham and nephews Brent and Rex Graham. He was raised in Port Arthur & graduated from Thomas Jefferson High School in 1952. After graduation he worked as a welder’s helper then served in the Army, in post war Germany as a Paratrooper. He retired after 40 years of employment at Jefferson Chemical as an R. & S. Operator and Supervisor. Donald was an outgoing person who lived life to the fullest. He had a love of flying and obtained his pilot’s license in the late fifties. He was a member of The Golden Triangle Gun Club and participated in multiple competitions there and throughout the Country. His highest achievement was as part of a Silhouette shooting team reaching the level of National Champion. Another highlight was when he and other seasoned shooters were challenged by a local SWAT team. It wasn’t even close. The old guys whipped them. Probably his favorite activity was riding motorcycles. He made many trips around the country highlighted by trips to Canada and Alaska. He also went on an off road adventure ride to Mexico which unfortunately ended in the ER in McAllen. There were a couple of riding accidents that ended with hospital attention but they never slowed him down. He rode his Gold Wing thousands of miles but would also load up his KLR 650 and take off to Colorado, Utah or all points out west. A number of his trips were made with his wife but they were made out of love for him, not the motorcycles. When the motorcycle trips were no longer practical he started rolling up miles on his bicycle. He would ride to central mall and get off and walk a mile or two inside then ride home. When his legs would no longer carry him on the bicycle he shifted to a golf cart where he and Schatzy would drive all over Groves (and beyond). He (they)spent many hours down at Morgan Sandlin’s garage where a number of the city’s greatest thinkers would congregate to work on the country’s greatest issues. In 2000 Donald made what he considered the most important decision of his life. He believed the gospel message that was presented to him and asked God to forgive him and to become his Savior. He was a faithful member of First Baptist Church of Groves where he sang in the choir, worked with the kitchen crew and was later ordained as a Deacon. Donald’s presence, his smile and his humor will be missed but the body which had been breaking down so badly over the last couple of years was healed Completely this past Easter Sunday and because of Jesus we Know that we will see him again soon. Memorial Contributions can be made to FBC Groves for the Building Fund / Youth Ministry

The family of Donald Roy Gil created this Life Tributes page to make it easy to share your memories.

Send flowers to the Gil family.