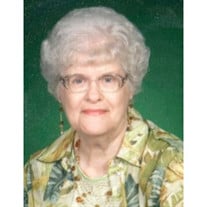 Dorothy "Faye" Cuniff, 90, of Port Neches, Texas passed away peacefully on Thursday, August 6, 2020, at Woodville Health and Rehab Center in Woodville, Texas. Faye was born March 16, 1930, in Broussard, Louisiana to Camillea LeMaire and Lillian Miia Lemaire. She was preceded in death by her parents, her loving husband of 58 years, Donald "Don" R. Cuniff, Jr., her sister, Shirley Ann Reed, and grandsons Jerrell Don Cuniff and Ryan Patrick Saunders. She was a long-time resident of Port Neches and a member of First Baptist Church in Port Neches for 69 years. She was also a member of Port Neches Chapter #677 Order of the Eastern Star, Port Arthur Assembly #160 Social Order of the Beauceant, and Ramallah Temple #89 Daughters of the Nile. Her fraternal affiliations and the friends she made through them were some of her treasures in life. Faye was a homemaker at heart. She loved cooking big family dinners and baking pies and cakes. Family get to gathers were always a special time for her. She loved decorating for the holidays and made many of the decorations used in her home. Crafts and crocheting were one of her favorite things to do, along with quilting. You could see her handiwork throughout her home. As much as she loved her family, she loved her Lord and Savior, Jesus Christ more. Her church was her heart and she enjoyed serving wherever she was needed. During her 69-year membership, she served as a Sunday school teacher and the Children's Division Director. She served on the flower committee and the bereavement committee, but her most favorite ministry was the Adults Away ministry. She held this position for 25 plus years and enjoyed sending cards to college students who were away from home. Many of those who received cards from her later told her how much they meant to them and that many times they would arrive just when they were needed most. Visitation for family and friends will begin at 10:00 a.m. Monday, August 10, 2020, at Levingston Funeral Home in Port Neches followed by the funeral service at 11:00 a.m. with Dr. David Mahoufz officiating. A private family graveside service will be held at Oak Bluff Memorial Park. Those left to cherish her memory include a sister Velta Marie Dupuy of Katy; daughters Deborah Lynn Cuniff of Burleson; Sue Cuniff Saunders and husband Jerry of Hillister; and son Russell Dickinson-Cuniff and husband David of Kennedale; grandsons Brandon Emmons and wife Misti of Port Neches; Scott Saunders and wife Dr. Lisa Kinch Saunders of Plano; Corey Cuniff and wife Marie of Hico; Sean Saunders of Houston; and Stephen Saunders and wife Michelle of The Woodlands; Great Grandsons Jace Emmons and Colby Emmons of Port Neches; Ryan Patrick Saunders and Johnathan Dallas Saunders of Rockmart, Georgia; and Taylor Cuniff of Kennedale, Texas. Memorial contributions may be made to Shriners Hospital for Children, Knights Templar Eye Foundation or St. Jude's Children's Hospital.

The family of Dorothy Faye LeMaire Cuniff created this Life Tributes page to make it easy to share your memories.

Send flowers to the Cuniff family.