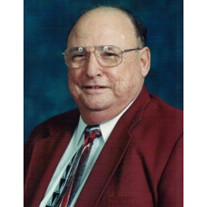 Dr. Joseph Paul Arisco Sr, 90, of Groves, TX departed this life to be with his Lord and Savior Jesus on Sunday, March 21, 2021. Dr. Joe was born on May 15, 1930 in Port Arthur, TX to Charles M. Arisco and Mary Colletti Arisco. After graduating from Thomas Jefferson High School in 1948, he attended the University of Texas in Austin followed by dental school at UT Houston. He married Loretta Serio on June 26, 1955, and their 53 year union produced 3 sons, 5 grandchildren, and 5 great-grandchildren. After dental school, Dr. Joe served in the USAF Dental Corps for 2 years in Wichita Falls. In August of 1957, he opened his practice with his Uncles, Paul Colletti, DDS and Ben Colletti, MD in Port Arthur. He practiced in the area for over 40 years and was ultimately joined by his son Dr. Jim Arisco. A devout Catholic, he was a member of Immaculate Conception Catholic Church in Groves, where he formerly served as Lector. He faithfully attended until he was no longer physically able. Dr. Joe was active in many civic and community organizations over the years, including United Community Services where he served as President and Budget Chairman for 15 years, Boy Scout Chairman of the Eagle District, Groves Rotary Club, serving as President and Secretary/Treasurer, a lifetime member of PTA, and the Port Arthur American-Italian Club. He was awarded the distinguished Silver Beaver Award from the Boy Scouts of America. He was a lifetime member of the Texas Dental Association, the Texas State Dental Society, and the Sabine District Dental Society. Most notably, petitioning the city for water fluoridation to prevent tooth decay. He truly loved being a grandfather, known as "Grandpa" to his grandchildren. Grandpa enjoyed taking his grandchildren on vacations, most by himself. He would sing his favorite 1940's songs to them in the car. ('A' You're Adorable, Chiquita Banana, Mairzy Doats) Grandpa would host sleepovers at his house; each child had their own tent set up in the living room. There were always cookies in the kitchen and a trip to the Waffle House for breakfast. They will forever remember him as a happy, morning person with a song in his heart. Upon retirement, Dr. Joe was elected and served on the Groves City Council for over 18 years, and was Mayor Pro tem during his term. He represented the City of Groves on the board of trustees for the TML Intergovernmental Employee Benefits Pool. His fellow board members became friends like family over the years. Grandpa embraced advances in technology and owned a computer long before most. He enjoyed watching Jeopardy with his son John, and had a knack for the trivia questions. He loved to plan a road trip with AAA and see the sights of the country by car. His sons remember the diagrams he would draw of how the luggage would fit in the trunk, which he taped in the car. In recent years, you could find him having lunch at the Groves Senior Citizens Center, and staying to work on a jigsaw puzzle. Joseph was preceded in death by his parents, wife Loretta, and sister Marie Barnett. He is survived by his three sons: Dr. Joseph P. Arisco, Jr. and wife Annveig of Tyler, John Arisco of Groves, and Dr. Jim Arisco and wife Lisa of Port Neches. Five grandchildren Lauren Askins and husband Ryan of Bluffton, OH, Teresa Marie Cowger and husband Doren of Gilbert, AZ, Tony Arisco of Tyler, Ashley Russell and husband Joshua of Longview, and Max Arisco of Kalispell, MT. Five great-grandchildren: Peyton Russell, Brennan Cowger, Jackson Russell, Thea Cowger, and Larkin Askins. Along with beloved nephews and numerous cousins in the area. A visitation for family and friends will begin at 1:00 p.m., Thursday, March 25, 2021 at Levingston Funeral Home in Groves. Funeral services will follow at 2:00 p.m. with Reverend Phil Chamberlin officiating. The family will have a private graveside service at Greenlawn Memorial Park. Honorary pallbearers: Tony Arisco, Max Arisco, Peyton Russell, Brennan Cowger, and Jackson Russell. In lieu of flowers, the family wishes for donations to the Groves Senior Citizens Center, Port Arthur Community Retirement Home, the United Methodist Temple or church of your choice, with remembrance naming Dr. Joe. God bless everyone. A heartfelt thank you to the staff of the Port Arthur Community Retirement Home, Dr. Sonali Patel, and Dr. Leonard Thome for their thorough and compassionate care over the past few weeks.

Dr. Joseph Paul Arisco Sr, 90, of Groves, TX departed this life to be with his Lord and Savior Jesus on Sunday, March 21, 2021. Dr. Joe was born on May 15, 1930 in Port Arthur, TX to Charles M. Arisco and Mary Colletti Arisco. After graduating... View Obituary & Service Information

The family of Dr. Joseph Paul Arisco, Sr. created this Life Tributes page to make it easy to share your memories.