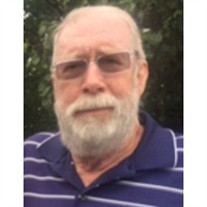 Frank David Jordan, 78, of Forney, Texas passed away Monday, March 8, 2021 at his home. He was born in Minette, Alabama on March 15, 1942 to David Donelson Jordan and Faye Dell Williamson Jordan. Frank was currently living in Forney, Texas with his wife, Diane Jordan and her daughter, Laci Browne and husband Nick and grandson, Mason. He retired as an Electrical Instrumentation Operator from Dupont. Frank was a member of Cathedral in the Pines in Beaumont, the Christian Fellowship Center and the Spindletop Car Club. For the past 10 years he lived in Forney, Texas and was a member of First Baptist Church of Forney. He proudly served his country in the United States Army Reserves. Frank owned a 1933 Ford Vicky and several corvettes. He enjoyed Hot Rods and his Blue Bell Ice Cream, but most of all he adored his grandchildren and loved spending time with them. A visitation for family and friends will be Wednesday, March 10, 2021 from 2:00 p.m. to 4:00 p.m. at Levingston Funeral Home in Groves. He is survived by his wife, Diane Jordan of Forney, Texas, daughter, Tara Vega and husband Jose of Georgetown, Texas, son, Chad Jordan and wife Kathy of League City, Texas and four grandchildren, Lauren Vega, Peyton Vega, Owen Jordan and Rylan Jordan. Frank was formerly married to Bettie Jordan and lived in Lumberton for 34 years.

The family of Frank David Jordan created this Life Tributes page to make it easy to share your memories.

Send flowers to the Jordan family.