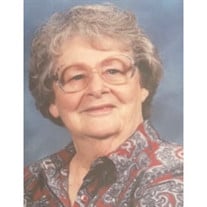 Gloria Lowe passed away on Friday, January 22, 2021 at Magnolia Manor Nursing Home in Groves, Texas at the age of 97. Ms. Lowe was born on July 15, 1923 in New Orleans, Louisiana to Peter and Elizabeth Chanove Ms. Lowe had 2 siblings, Conrad Chanove (deceased) and Bettye Schmidt (deceased). When Gloria was in high school, her father, a Texaco employee was transferred to Port Arthur, Texas where Gloria enrolled in Thomas Jefferson (TJ) High School. It was at TJ where Ms. Lowe met the love of her life, H.A. Lowe. The two soon fell in love and married on February 13, 1942. They had a love for each other like no other, always seen hand in hand until Mr. Lowe's passing on August 15, 2010. 68 years of marriage. The Lowe's first resided in Port Arthur, Texas until moving to Groves where they would raise their 2 children, Pamela Lowe Bailey and Johnnie Lowe, deceased. The Lowe's were lifelong members of Immaculate Conception Catholic Church. Gloria Lowe was known for her cake decorating skills easily seen in her doll cakes and detailed Indian head cakes. Ms. Lowe won a cake decorating contest and was showcased by the Port Arthur News. Ms. Lowe also was a painter, known for painting and baking ceramics, an Indian head, an elf shoe, 1920s lady's boot, a lighted Christmas tree, a Santa Clause, a snowman, a ghost, a pumpkin, Santa cottages and an elaborate 24 piece nativity scene, which she painted for each of her kids. Ms. Lowe was also known for her crochet blankets, baby blankets, angels, coasters, dishcloths, scarfs, basically she could do it all with some yarn and a hook. We can't forget her love to sew; which she of course mastered like no other. In her later years, Ms. Lowe loved her gardening. Spending time in her garden with her flowers was a time she so enjoyed. Having said all this, spending time with her family and cooking for them was what meant the most to Ms. Lowe. Her family was her everything! The Lowe's were blessed with 4 grandchildren, Jay, Tammy, Shawn and Wendy. It was through the first grandchild, Jay that the Lowe's earned the name PawPaw and MawMaw. The grandkids have fond memories of their "boys" and "girls" trips with their grandparents each summer in the RV/motorhome. A fond memory is of MawMaw, each time she would see a rainbow, she could be heard singing, Somewhere Over the Rainbow. MawMaw loved the holidays going above and beyond for her family, but Halloween, was a special treat. MawMaw is known for her amazing Halloween spread, her witches brew made with dry ice, her haystacks, her mummy sandwiches, her candy apple punch and many more. We could go on and on about this kind, special, loving, caring, giving, tender-hearted little lady. Her greatgrandchildren, Chris, Cecily, Justin, Connor and Braylen, they could bring tears to MawMaw's eyes just by simply walking in the room. MawMaw's love for them was over the top. And we can't forget MawMaw's numerous nieces and nephews, for which she loved so dearly. Ms. Lowe, our beloved MawMaw is survived by her loving daughter, Pamela Lowe Bailey, grandsons, Jay Bailey (Luci), Shawn Lowe (Amelia), granddaughters, Tammy Bailey, Wendy Gardner (Todd), great grandchildren, Chris Fontenot (Courtney), Cecily Fontenot (Tyler), Justin Bailey, Connor Bailey, great great-grandchild, Braylen and numerous nieces and nephews. MawMaw, you have a place within our heart that no one else can fill. You're a dear and special MawMaw who we love and always will. Memorials may be made to: Immaculate Conception Catholic Church 4100 Lincoln, Groves, Texas 77619

Gloria Lowe passed away on Friday, January 22, 2021 at Magnolia Manor Nursing Home in Groves, Texas at the age of 97. Ms. Lowe was born on July 15, 1923 in New Orleans, Louisiana to Peter and Elizabeth Chanove Ms. Lowe had 2 siblings, Conrad... View Obituary & Service Information

The family of Gloria Mary Chanove Lowe created this Life Tributes page to make it easy to share your memories.

Send flowers to the Lowe family.