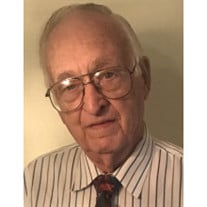 Homer Harold Brown, 92, of Port Neches, Texas passed away Sunday, November 15, 2020 in Baytown, Texas. Harold was born September 3, 1928 in Quanah, Texas to Homer and Annie Brown. He grew up in Malakoff, Texas where the Baptist Church and school system provided a basis for his life. He graduated from high school in 1946, and was among the first students of Henderson County Junior college (Trinity Valley Community College). In 1948 he began a four year service with the US Air Force. In 1952 Harold began a five year tenure of Variety Store management. Marriage to Winnie Harris came in 1957. Shortly, he returned to an educational pursuit resulting in graduation in 1960 from the University of Corpus Christi (Texas A & M at Corpus Christi) with a degree in Business Administration, minor in Religious Education. 1960 also saw the beginning of employment with Jefferson Chemical Co. (Texaco Chemical Co.), where he was employed for 28 years. The first 20 years with company led to the position of Traffic Supervisor. The last eight years were spent as Senior Buyer for Texaco Chemical Co., Port Neches plant. In 1961 he began to use his Religious Education training at Southside, First Baptist Port Neches, Woodcrest in Port Arthur and eventually in 1993 to Calder, all Baptist congregations. Other ministry services include: Shepard's Inn (a facility for visitors to area prisoners) and Triangle Aids Network (which primarily transported patients to Galveston and Houston for treatment). Calder church activities included area hurricane repair, Mission trips, and Habitat for Humanity building. Along the way he managed to work in 22 years on the Planning and Zoning Board for the City of Port Neches. There is a tapestry of Americana in his life that, although not the same, is woven into the lives of all the parents, grand-parents or great grand-parents for the last 85 or more years. A visitation for family and friends will begin at 1:00 p.m. Saturday, November 21, 2020 at Levingston Funeral Home in Port Neches with a graveside service to follow at 2:00 p.m. at Oak Bluff Memorial Park in Port Neches with Reverend Jim Fuller officiating. Harold was preceded in death by his wife, Winnie Brown, a sister and two brothers. Surviving relatives include his son, Paul Brown and wife Tammie of Baytown, Texas; three grandchildren, Breanne Brown, Jake Carroll and wife Renee, and Lisa Schrock and husband Wade; three great grandchildren, Sloan, Mason, and Jacob. Memorial contributions may be made to Calder Baptist Church, 1005 N. 11th Street, Beaumont, Texas 77702 or to the American Cancer Society @ Cancer.org.

Homer Harold Brown, 92, of Port Neches, Texas passed away Sunday, November 15, 2020 in Baytown, Texas. Harold was born September 3, 1928 in Quanah, Texas to Homer and Annie Brown. He grew up in Malakoff, Texas where the Baptist Church and... View Obituary & Service Information

The family of Homer Harold Brown created this Life Tributes page to make it easy to share your memories.

Send flowers to the Brown family.