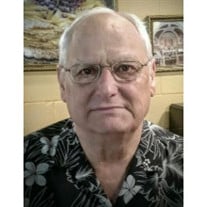 John Michael "Mickey" Breaux was born in Port Arthur, TX 75 years ago and although fully vaccinated, he contracted Covid and tragically passed away less than a week later at the hospital on August 20, 2021. He leaves so many behind to mourn his untimely passing. His loving wife of 48 years Becky "The Saint" Fontenot Breaux, his children James "Chan" Breaux and his daughter Misty Breaux, sister-in-laws Myrna Breaux, Peggy Fontenot Cameron Mundschau & husband Steve, Sheila Fontenot Dickey & husband Jim, brother-in-laws Tom Fontenot, Roger Fontenot & wife Judy and Mike Auffurth & wife Paula, and nieces and nephews: Beth Thompson, Dan Breaux, Gary Breaux, Jody Nunez, Chris Cameron, Chad Cameron, Andrea Fontenot, Rachel Gamsby, Jarod Yeary, Brianne Gravett, Erin Leznicki and their spouses and children in TX, LA, CA and FL. Preceded in death by his father and mother Oresse & Levie Dartes Breaux, his sister Helen Breaux Locke & husband Jack & son Leland, his sister Dolly Breaux Nunez & her son David Nunez and his brother Danny Breaux, and his in-laws McClure Fontenot, Eva Gaspard Fontenot Auffurth & Bud Auffurth, and brother-in-law Jerry Cameron. He graduated from Thomas Jefferson High School in Port Arthur, TX in 1964 and spent some time at Lamar University before the Army called him up and he served his two years in Texas and Louisiana. Mickey then went to work in the FINA refinery where he also began his service in the union with the: AFL/CIO, OCAW, PACE and the United Steelworkers. After he retired from FINA in 1991, he went to work full time for the United Steelworkers first as a Union Representative, then became the District 13 Director & Vice President on the USW Board of Directors until his retirement in 2014. He then joined the Museum of the Gulf Coast in Port Arthur where he served as a volunteer & docent. He attended St. Elizabeth Catholic Church, volunteered for the United Way and was a proud, active and loyal member of the Democratic Party. He was a long standing member of the Golden Triangle Federal Credit Union for many decades as well as served on their Board of Directors in various positions and was their current President until his sudden passing. He deeply loved and was passionate about his family, friends, his home, unions, music, his hometown and he always fought the good fight standing up for what was right and just. His love, charm, sense of humor, support and big personality are now and will forever be greatly missed. Due to the current outbreak, there will be no services at this time but there will be a celebration of his life at a later date. It is the wish of his family that everyone please get vaccinated in order to prevent further sickness, death and heartbreak.

John Michael "Mickey" Breaux was born in Port Arthur, TX 75 years ago and although fully vaccinated, he contracted Covid and tragically passed away less than a week later at the hospital on August 20, 2021. He leaves so many behind to mourn... View Obituary & Service Information

The family of John Michael "Mickey" Breaux created this Life Tributes page to make it easy to share your memories.

Send flowers to the Breaux family.