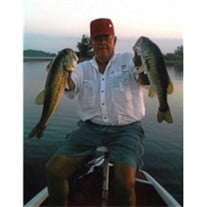 John Delbert Morgan, Sr. August 4, 1941 ~ September 12, 2019 John Delbert Morgan, Sr., 78, passed away September 12, 2019. A lifelong resident of Nederland, he was a Veteran of the US Army, and a 50 year member of the Nederland Masonic Lodge # 1368. John was an active community leader, having served as chairman of the Diamond Jubilee Committee in 1973, and is also one of the founding fathers of what we know as the "Nederland Heritage Festival". He along with other men of Nederland created the Nederland Junior League Football program for the youth of the city. In his lifetime he held many positions; police officer, refinery worker, construction superintendent to business owner. Giving up High School to join the service in 1959, he proudly earned a degree in Business from Lamar University 30 years later. An avid outdoors man, he spent the best years of his life "Beatn the Brushtops" on lake Sam Rayburn. A visitation for family and friends will be from 10:00 a.m. to 12:00 p.m. Wednesday, October 2, 2019 at Levingston Funeral Home in Port Neches. John is preceded in death by his wife of 50 years, Barbara, and his son, John Jr. He is survived by his son, David and grandchildren, Kade, Kalah, Devin, and Katlin Morgan; and sister, Chris Rainey and family.

The family of John Delbert Morgan, Sr. created this Life Tributes page to make it easy to share your memories.