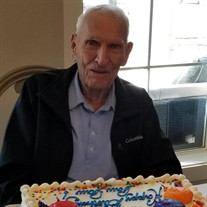 John Dee Leavins Sr. passed from this life on April 17, 2022, three months beyond his 100th birthday. A visitation for family and friends will be held from 10:00 a.m to 11:00 a.m. on Wednesday, April 20, 2022 at Levingston Funeral Home in Port Neches. Funeral Services will be begin at 11:00 a.m. at Levingston Funeral Home in Port Neches with burial to follow at Oak Bluff Memorial Park in Port Neches. Officiating will be Reverend Kenneth Leavins of Triangle Baptist Church of Nederland. John was born in Bonifay, Florida, located in Holmes County, on January 4, 1922. His father passed away when he was almost three years old. John, his mother Readie, his brothers, Chester, Brutus and Robert and sisters, Francis and Louise, became a part of a blended home with their step-father, step-sister, Lou Nette and step-brother, Wilburn. There were tough times and farming was their way of life. John left Bonifay for a CC camp in California. Later, he would enlist in the Army Air Force, with World War II sending him to India and China. He was proud of his service to his country and a true patriot. John married Bertha Singletary and their life-long commitment would begin with a family beginning in Bonifay. Work would later lead them to Port Arthur, Texas where he first worked as a heavy equipment operator with the City of Port Arthur. The family would move to Nederland in about 1956. John and Bertha would have three sons, who attended Nederland Schools and Lamar Tech (University). John always stressed the importance of education from his experiences in life and was so proud of Johnny (college professor), Jerry (dentist) and Kenneth (electrical engineer). Bertha passed away in 2008 and with much help and love from his family, John was able to live in his home alone until his death. So much love and appreciation is expressed for his cherished friend and care-giver, Mable Stirling, who has been a true blessing in his later years. The values in John’s life have always been seen in his toughness, a great provider for his family, hard work, fiscal responsibility, patriotism, honesty, and friendship. John retired as a supervisor from Arco and was a member of the Port Arthur Masonic Lodge. Johnnie is preceded in death by his wife of sixty-five years, Bertha Leavins. Left to cherish his memory are his sons; John (Sharon), Jerry (Gayle) and Kenneth (Tina). His grandchildren; Stephen, Christy, Cathy, Jeffrey, Christopher, Katie and Emily, as well as 17 great-grandchildren. The Leavins’ family have faithfully attended and live their faith. It wasn’t until John was in his fifties that he came to personally profess his faith in Jesus Christ as Savior. It is with much thoughtfulness, joy and anticipation, we cherish that he entered the presence of Jesus Christ on this Easter Sunday, 2022!

The family of Mr. Johnnie Dee Leavins Sr. created this Life Tributes page to make it easy to share your memories.

Send flowers to the Leavins family.