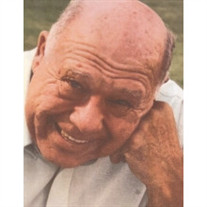 Leonard "Bo" Doyle Jr., 73, of Groves, Texas passed away Friday, September 18, 2020 with his loving family surrounding him at St. Joseph Medical Center in Houston, Texas. Bo was born March 1, 1947 in Merryville, Louisiana to Leonard Doyle Sr. and Sylvia Doyle. Bo was a resident of Groves for 50 years and was a member of Faith Tabernacle. He retired from Motiva as an operations supervisor after 42 years of service. Bo proudly served in the U. S. Army during the Vietnam War. He received a National Defense Service Medal, and Vietnam Service Medal with 2 Bronze Service Stars. He was preceded in death by his parents Leonard Doyle Sr. and Sylvia; sister, Sylvia Doyle; father-in-law and mother-in-law Lawless and Francis Broussard; and brother-in-law Ricky Broussard. Survivors include his loving wife of 49 years, Debbie Broussard Doyle of Groves; daughter, Kristie Gilchrist and husband Chad of Port Neches; son Kevin Doyle and wife Joni of Orangefield; three sisters, Adra Smith and husband Reverend Terry Smith of Kinder, LA, Mary Doyle of Raleigh, NC, and Karen Smith and husband Kenneth of Bon Wier, LA; brother, Gary Doyle and wife Debbie of Merryville, LA.; grandchildren, Mason Roccaforte, Kacey Broussard, Preleigh Doyle, Savannah Gilchrist, and Burkleigh Doyle; and numerous nieces and nephews. Bo enjoyed hunting, fishing, cutting trees, being outdoors but what he loved the most was being with his family. Bo was the most, kind hearted person you will ever meet. He was always willing to lend a helping hand and I don't think he knew the word no. He was loved by many and will be deeply missed. A visitation for family and friends will be Friday, September 25, 2020 from 5:00 p.m.-8:00 p.m. at Levingston Funeral Home in Groves. Funeral services will be at 11:00 a.m., Saturday, September 26, 2020 at Levingston Funeral Home with Pastor Kaleb Rule, Reverend Terry Smith and Reverend Rod Nesmith officiating. Military graveside rites will follow at Oak Bluff Memorial Park in Port Neches.

The family of Leonard Doyle, Jr. created this Life Tributes page to make it easy to share your memories.