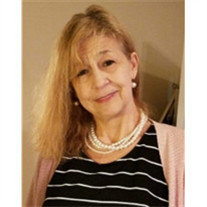 Maria "Marie" Marcela Cribbs, went to be with her Lord October 3, 2019 in her home. She was a champion through many medical problems, now resting in complete healing for the rest of eternity. Marie was born in Buenos Aires, Argentina, on February 21, 1962, to Matilde Carmen Mercedes Ramos Mejia (Zavalla) and Rafael Maria Ramos Mejia, both deceased. Marie attended San Marcos, a British school in Buenos Aires, becoming proficient in the English language. After moving to the United States, Marie met members of King of Grace Church in Haverhill, Massachusetts and accepted Jesus Christ as her Lord and Savior. Moving south to Texas, she married William "Bill" H. Cribbs, of Port Neches, TX, on April 9, 2006. Marie and William had met on the ChristianCafe.com website, both praying that God would lead them to their new soulmates. Marie was preceded in death by her parents as well as two brothers, Marcelo Ramos Mejia and Eduardo Ramos Mejia, both of Buenos Aires. She is survived by two siblings, a sister, Mara Lorenza "Chiqui" Ramos Mejia de Basombrio (Fernando), of Bariloche, Argentina; and a brother, Rafael Mara Ramos Mejia (Sara Rosa), of Buenos Aires, Argentina. Marie is also survived by six children, daughter, Felicity Lolly Cribbs, of Houston, and son, Freddy Hoyt Cribbs, of Port Arthur; her step children, daughters, Abigail Renee Cribbs Gauthier (Aaron), of Bridge City; Elizabeth Brook Cribbs Hall (Alvin), of Groves; sons, John Cory Cribbs, Port Neches; and Stephen Paul Cribbs (Amber) of Groves. Marie loved to read her Bible, cook, be with her family, and entertain the grandkids, who called her "Memaw". She impacted many people as they met her over the years, proven by the many wonderful comments on her Facebook announcement. Memorial contributions can be made to her favorite charity, Messenger International, the ministry of John and Lisa Bevere, https://messengerinternational.org/donate/donation-form/ Funeral services will be at 11:00 a.m., Monday, October 7, 2019 at Levingston Funeral Home in Port Neches with Reverend Donnie Robbins officiating. Burial will follow at Oak Bluff Memorial Park. A visitation for family and friends will be before the service on Monday beginning at 10:00 a.m. at the funeral home.

Maria "Marie" Marcela Cribbs, went to be with her Lord October 3, 2019 in her home. She was a champion through many medical problems, now resting in complete healing for the rest of eternity. Marie was born in Buenos Aires, Argentina, on February... View Obituary & Service Information

The family of Maria "Marie" Marcela Cribbs created this Life Tributes page to make it easy to share your memories.

Maria &quot;Marie&quot; Marcela Cribbs, went to be with her Lord October...

Send flowers to the Cribbs family.