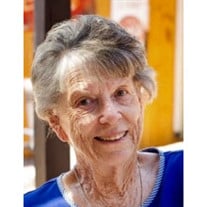 Mary Patricia (Patt) Eggleston Farrow, formerly of Groves, TX, entered eternal life on October 25, 2019. Patt was born in Galveston, Texas on November 30, 1932 to Selden and Annie Eggleston. Patt attended high school in Hitchcock, TX. She married her high school sweetheart, Eddie Farrow, in 1953 and the couple moved to Groves. Patt worked as an adjuster at Jones-Levell and Underhill Adjusting for many years. She had a real passion for gardening and was known to many as, "the gardener in the little yellow house at 6726 Jefferson Street in The Groves". Besides gardening, she had a talent for creating beautiful spaces inside her home, needlework/knitting, and loved to read. Following retirement she and Eddie enjoyed RV traveling for many years, but one of her greatest pleasures was spending time with her children/grandchildren/great grandchildren, who called her "Gogo". Patt was preceded in death by her husband Eddie and son, Patrick, her parents, and siblings, Selden Eggleston and Genevieve Wolters. She is survived by her children Michael Farrow (Lorraine) of Kaysville, UT, Dan Farrow (Joyce) of Charlotte, NC, Joan Domingue (Kent) of Addison, TX, and Susan Nicotre (Terry) of Port Neches, TX. She has a surviving sister, Joan Beauregard. Grandchildren, Steven Farrow, Kaycee Nicotre Smith (Nate), Kyler Nicotre, Darcee Domingue, Davis Domingue, Christina Farrow Borsos (William) and Kody Reynolds. Great-grandchildren, Grant and Miles Smith. Pallbearers to carry our sweet mom to her resting place are Davis Domingue, Kyler Nicotre, Steven Farrow, Nate Smith, Richard Montalvo, and Kody Reynolds. Funeral arrangements are at Levingston Funeral Home - Port Neches, TX on Saturday, 11/2/19. There will be a visitation from 8:00 a.m.-10:00 a.m., a chapel service at 10:00 a.m., followed with burial at Oak Bluff in Port Neches, TX. Following the services the family would like to invite everyone for lunch at the K C Hall in Port Neches, TX to celebrate her life.

The family of Mary Patricia (Patt) Eggleston Farrow created this Life Tributes page to make it easy to share your memories.