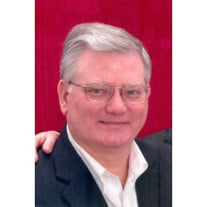 Michael G. Jackson, 63, of Houston, Texas passed away Sunday, December 1, 2019 at Hermann Memorial Hospital in Houston, Texas. Michael was born July 18, 1956 in Groves, Texas to Henry Grady Jackson and Odessa Smithy Jackson. He was a resident of Houston, Texas for over 32 years and a member of Second Baptist Church, Houston, Texas. He was preceded in death by his father, Henry Grady Jackson, and his mother, Odessa Smithy Jackson. Survivors include his wife, Sheryl Rutherford Jackson of Houston, Texas; and his brother, Gary Lee Jackson of Groves, Texas. A visitation for family and friends will begin at 9:00 a.m., Friday, December 6, 2019 at Levingston Funeral Home in Groves, Texas followed by the funeral services at 10:00 a.m. Burial will be at Memory Gardens Cemetery in Nederland, Texas. Memorial donations in memory of Michael can be made to: Second Baptist Church, 6400 Woodway, Houston, Texas 77057 or www.second.org.

The family of Michael G. Jackson created this Life Tributes page to make it easy to share your memories.

Send flowers to the Jackson family.