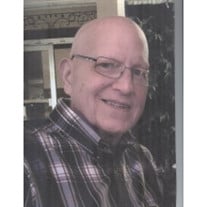 Michael "Kent" Koerth, 72, of Port Neches, Texas went to his Heavenly home on Tuesday, January 12, 2021, after a courageous battle with cancer. Kent was born on March 24, 1948 in Port Arthur, Texas to Alex and Dorothy Blackburn Koerth. He was a 1966 graduate of Thomas Jefferson High School and a graduate of Stephen F. Austin University with a B.B.A. in Business Administration. He married the love of his life, Jane Lippincott Koerth, on May 23, 1970 and they celebrated 50 years of marriage last year. Kent retired from Motiva with 35 years of service as a Financial Advisor. He enjoyed his work and the many friends he acquired during this time. Kent was a member of the Methodist Temple his entire life and loved his church and the people he knew there. He served as an usher for many years, served on the Administrative board, member of Methodist Men, and a proud member of the Asbury Sunday School Class. He loved contributing his time to his church when he was able to help. He loved his daughter, Kristi Vannett, and his son, Clay Koerth. He was so very proud of his beautiful granddaughter, Taylor Vannett, who was the apple of his eye. Survivors include his wife, Jane, daughter, Kristi Vannett of Kingwood, son, Clay Koerth of Silsbee, and his precious granddaughter, Taylor Vannett of Kingwood, and his faithful dog, Callie who remained by his side during his illness. Also surviving him is his sister, Ann Rogers and husband, Larry, brother-in-law, Pete Lippincott and wife Jill. Special thank you to our friends, Fran and Rob Carlquist, and all who cared for Kent during his illness, especially his angel nurse, Felicia. Memorial services will be held on Saturday, January 16, 2021 with visitation at 11:00 a.m. with the service at 12:00 p.m. followed by a reception at the Methodist Temple, 4101 Hwy 73, Port Arthur, Texas. Levingston Funeral Home in Groves is handling the services. Those wishing to make a memorial contribution may send them to: The Methodist Temple, 4101 Hwy 73, Port Arthur, Texas 77642 for the Temple Day School or Temple Youth.

Michael "Kent" Koerth, 72, of Port Neches, Texas went to his Heavenly home on Tuesday, January 12, 2021, after a courageous battle with cancer. Kent was born on March 24, 1948 in Port Arthur, Texas to Alex and Dorothy Blackburn Koerth. He... View Obituary & Service Information

The family of Michael "Kent" Koerth created this Life Tributes page to make it easy to share your memories.

Send flowers to the Koerth family.