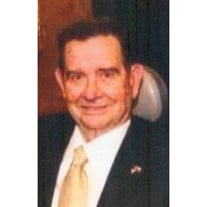 Paul Beard, a man of modest beginnings left this world in a humble and peaceful manner on Saturday, the 28th of March 2020 at age 86. Born in Broaddus, Texas on August 24, 1933, Paul arrived at Port Arthur College after graduating high school at the age of 16. After earning his Associates Degree, he began working as an inventory clerk at what is now Sabine Universal Products where he rose through the ranks to be named president and eventually owner. In October of 2019, Paul celebrated his 69th anniversary with the business. He met and married the love of his life, Grace, and was a devoted husband and proud father of their 13 children. Paul believed in service and duty, was a religious man, a family man, and a business man. Paul was appointed to the board of the Beaumont Navigation District by Judge Carl Griffith in July of 1998, and in that role, collaborated with commissioners and legislators to create the Sabine-Neches Navigation District. He served as Chairman of the board since 1999. Paul felt so fortunate to see the funding of the deepening project, which along with Randy Reese, will be their legacy. Pauls commitment ran deep! Paul has enriched the lives of countless people through his community service. He was a valued member of the local Propeller Club and a Lifetime Member of the Sertoma Club. Paul was a member of St. Joseph Catholic Church and served on the parish council. He served on the school board of Bishop Byrne High School and was foreman on two Jefferson County grand juries. He was presented with the Port Arthur News Father-of-the-Year in 1964, Maritime Person of the Year Award, the Tom Jackson Sabine Neches Waterway Outstanding Service Award, and the Arthur Stillwell Award. Proposed by State Representative Joe Deshotel, Paul was honored by resolution on the floor of the State of Texas House of Representatives in April of 2015. Paul loved his Thursday nights with his poker buddies, Sheilas strawberry cakes, Esthers gumbo, and working with the board and supportive staff of the SNND. The family would like to thank Stella for caring for Dads home and Home Care Elite for their tender care of Dad over the last several months. Paul was preceded in death by his beloved wife of 54 years, Grace Thompson Beard; daughter, Leslie Sapp; his parents, Ora Mae and Ernest Beard; and several siblings. He is survived by twelve of his children: David (Jenny), Sue (Karl Hanner), Mark (Lori), Chris (Maureen), Paula (Steve Housinger), Cherie (Mike Heard), Anita (Jody Barsalou), Joey (Tamra), George, Scott (Jo Ann), Steven (Michelle) and Kevin, 32 grandchildren and 18 great-grandchildren. Paul also leaves behind a sister, Edna Machann, brothers Hubert (Betty), Oscar (Nancy) and Raymond (Dianne), other extended family and many close friends. Arrangements are in the care of Levingston Funeral Home in Groves. Due to current world events, a visitation and funeral service are not possible at this time. The Beard children will have a private graveside service, conducted by Fr. Sinclair Oubre, on Tuesday at Greenlawn Cemetery. The service will be live streamed at the Apostleship of the Sea Diocese of Beaumonts Facebook page. Once restrictions are lifted, a memorial mass and celebration of Pauls life will be held at a later date. The family appreciates your thoughts and prayers. In lieu of flowers, a memorial gift can be made to the International Seafarers Center or the charity of your choice.

Paul Beard, a man of modest beginnings left this world in a humble and peaceful manner on Saturday, the 28th of March 2020 at age 86. Born in Broaddus, Texas on August 24, 1933, Paul arrived at Port Arthur College after graduating high school... View Obituary & Service Information

The family of Paul Beard created this Life Tributes page to make it easy to share your memories.

Paul Beard, a man of modest beginnings left this world in a humble...

Send flowers to the Beard family.