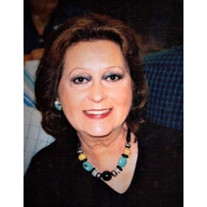 Portia "Honey" Alice Smith Levingston, 88, of Port Neches, Texas passed away Monday, October 4, 2021 at Arden Place in Beaumont. She was born on January 4, 1933 to Porter Alex Smith and Annabelle Brock Smith. Portia moved with her family to Port Arthur from Central Texas at the age of three. She attended Port Arthur Schools and was a graduate of Thomas Jefferson High School. Following graduation she attended Port Arthur College and Lamar University in Beaumont. She was employed with Texaco, Inc. as a Mail Girl and Stenographer. In 1955, she and husband Joel, established Levingston Funeral Home and Ambulance Service in Groves. That first funeral home was destroyed by the tornado that struck Groves in November of 1957. Portia was inside the building at the time. They rebuilt the funeral home across the highway on 39th Street. The Levingston family later purchased a second location in Port Neches. Today the funeral home is still family owned and operated by their children, Jay and Kathy Levingston. Portia was an active member of the United Methodist Temple, former Board Member, Chairman of the Worship Committee and member, Past President and Teacher of the Cullen Hamilton Bible School Class. She served on the Board of the Port Arthur Historical Society, during which time she wrote the original Docent's Manual for the Pompeiian Villa which is still in use today. She also helped plan the first "Gulf Coast Gala". Portia was a member of Port Arthur Service League and Past President of the Service League Sustaining Group, lifetime member of the Houston Livestock Show and Rodeo, active in the Texas Funeral Directors Association and Southeast Texas Funeral Directors for over 50 years. She was a Rotary Paul Harris Fellow. She and Joel supported the Groves Rotary Exchange Program and hosted five European students in their home over the years. When her children were younger, she served as Cub Scout, Blue Bird and Camp Fire Leader, officer and Life Member of Red Hussar Booster Club and Secretary of the Yellow Jacket Booster Club. Growing up, Kathy and Jay, showed Quarter Horses, so for years the family traveled around the entire United States and to the National Competition in Oklahoma. She was active in CavOilcade for over 35 years. She was a princess, chaired the Duchess Committee, Escort Committee and hosted the Royalty Party and Queen's Tea in her home. Later, she was Mother and Grandmother of Princesses and a Duchess. Portia had a lifelong interest in fashion and art. She and her daughter, Kathy, operated Portia's, a specialty shop featuring ladies apparel and gifts in the 1980's. She was also an accomplished artist and spent two summers in France studying art at the Paris American Academy of Art. She loved to entertain and was known for the "Derby Parties" she hosted at the family ranch over the years. Portia enjoyed life............she tried to instill in her children and grandchildren a love of art, travel and the beautiful things in life! Her top priority and thing that gave her the most joy was spending time with her family and friends; especially being "Honey" and spoiling her grandchildren. A visitation for family and friends will be Monday, October 11, 2021 from 5:00 p.m. to 7:00 p.m. at Levingston Funeral Home in Groves. Funeral services will begin at 10:00 a.m. on Tuesday, October 12, 2021 at the funeral home. She will be buried next to her husband, Joel Levingston, in Greenlawn Memorial Park. Portia is survived by her children, Kathy Levingston Lewis and husband John of Port Neches, Texas and Jay Levingston and wife Belinda of Fannett, Texas, grandchildren, Kara Scott, Katie Scott, Brooks Levingston Weisse and husband Kylor and Brock Levingston and wife Avery, sisters, Carolyn Landry and husband Ray, Loralea Curl and Olive Veal and numerous nieces and nephews.

The family of Portia A. Smith Levingston created this Life Tributes page to make it easy to share your memories.