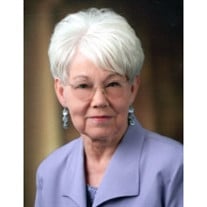 Rita Beth (Smith) Johnson, 87, passed away peacefully on 9/30/2020 in Houston. Port Neches, TX & Lufkin, TX are where she made her homes and was a member of the Baptist church in both. She was a loving wife to Ben, devoted mother to Phyllis & Jana & special grandma to Ryan. In Port Neches, where she & Ben raised their daughters, Rita was an avid gardener, seamstress & baker. She loved birds & loved to listen to them sing as she worked in her yard. There were always birdfeeders, houses & water for her bird friends. When it was too hot, cold or dark for gardening, Rita would often be sewing for her girls, herself or the church. Many, many yards of fabric went through Rita's hands to become beautiful clothing & costumes. She also enjoyed crochet & embroidery from time to time. Autumn was her favorite season & that is when she baked the most. It's also the time of year the blackbirds made what she called "ribbons in the sky" as they flew through in huge numbers making loops & waves in their flight. When Rita's girls were in high school she returned to work as a legal secretary & eventually moved on into Adult Probation in Beaumont where she retired. Rita volunteered at Mid-Jefferson Hospital for many years after retirement & received a Volunteer of the Year award. In 2008, she moved back to Lufkin to be near her siblings & their spouses. She bought a new home on her 75th birthday & immediately began to plan the yard which was beautiful. Funeral services will be held Saturday, October 3, 2020 at 10:00 a.m. at Levingston Funeral Home in Port Neches with Reverend Jim Johnson officiating. A graveside service will follow at 3:00 p.m. at Garden of Memories Memorial Park in Lufkin, Texas. Visitation for family and friends will be held Friday, October 2, 2020 from 6:30 p.m. to 8:00 p.m. at Levingston Funeral Home in Port Neches. Rita is preceded in death by her husband, Ben; parents, John W. & Maude (Sellars) Smith; siblings & spouses, Glenn & Margaret Smith, C.A. & Billie Smith and Bill & Joyce Dubose as well as 3 nephews, Charlie, Bobby & Steve. She is survived by her daughters Phyllis, Jana & grandson, Ryan. Her nieces Karen (Dennis) Murph, Marla (Carlton) Simmons, Carol (Web) Jenkins; nephews Randy (Kim) Dubose & Richard (Charla) Smith & many younger nieces & nephew & their families as well as friends in Port Neches, Lufkin & Houston. Special thanks to Lightheart Memory Care Home & owner Heather, manager Brittney, all of the many caregivers & residents for their loving support. Also, Providence Hospice & the continuous care nurses, who treated mother as if she were their very own. Flowers are welcome but a donation to a charity of your choice is appreciated too.

Rita Beth (Smith) Johnson, 87, passed away peacefully on 9/30/2020 in Houston. Port Neches, TX & Lufkin, TX are where she made her homes and was a member of the Baptist church in both. She was a loving wife to Ben, devoted mother to Phyllis... View Obituary & Service Information

The family of Rita Beth (Smith) Johnson created this Life Tributes page to make it easy to share your memories.

Send flowers to the Johnson family.