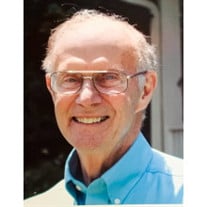 Roland "Buddy" Cyril Stansbury passed away peacefully on Sept. 3, 2021. He was 89. Buddy was born Oct. 1, 1931, to Roland Cyrille and Leonie Stansbury in Port Arthur. He graduated from Bishop Byrne High School in 1949. In 1953, he was part of the first class to graduate with a four-year degree from what was then known as Lamar State College of Technology, with a B.S. in Chemistry. He was a life-long resident of Port Neches-Groves. Buddy learned resilience at a very early age. Only seven years old, he lost his father. In addition to tending to his studies, young Buddy helped with his mother's flower business to support the family. Following graduation, and like his father before him, Buddy went to work in the chemistry lab at Gulf Oil Refinery (later acquired by Chevron). His work as a chemist even came through when cooking for the family. He would often be the recipient of good-natured ribbing for his preciseness of measurement for the recipes, but would never waver from the formula. After 35 years of service, Buddy retired from Chevron in 1989. Buddy loved camping as a young child. Later, scouting played a critical role in his life. Buddy said that on the way to earning his Eagle Scout, and later induction into the Order of the Arrow, he learned to accept responsibility, gained self-sufficiency, and developed an appreciation of nature. As a father, he relished sharing his love of the outdoors with his kids on many family camping adventures and fishing outings, even the one that resulted in a hook in his nose. Buddy was known to all for his humbleness, gentleness, kindness, and generosity. He was intelligent, wise, and loving. It is no surprise that he was voted "Most Diplomatic" and "Most Representative Boy" in High School. His generally serious nature was punctuated by a surprising sense of humor and fun. Buddy was preceded in death by his first wife, Annabelle ("Miss A") Taylor Stansbury, who passed away in 2002 after 45 years of loving marriage and partnership. Buddy earned the cherished nickname "Mr. Annabelle," in honor of his unwavering support over the years for Annabelle's work as the matriarch of the Taylor Dance Studio, which she founded in Port Arthur around 1950. Together, Annabelle and Buddy ran a highly successful school for decades, bringing the art and joy of dancing to thousands of students across multiple generations. Many of Taylor Dance's students have performed from the studios in Hollywood to the stages of Broadway, as well as pursued their own careers as dance instructors. Taylor Dance Studio, Inc. continues as "Miss A's and Mr. Annabelle's" legacy to this day. Buddy was also preceded in death by his sister, Barbara Fey Cunningham, and her husband Grover F. Cunningham. Buddy was happy and fortunate to find a soulmate later in life. He is survived by the loving Beverly Landrum, his wife of 10 years. Buddy is also survived by his three children, Tami (and Chuck) McIntire of Marietta, GA, Scott Stansbury of Anchorage, AK, and Todd Stansbury (and Patti Cary) of Charlottesville, VA; seven grandchildren, Blake (and Emily) McIntire, Dayle (and Gregg) Koester, Reid McIntire, Marissa (and Taylor) Gaines, Cody (and Stephanie) Stansbury, Ashley Stansbury, and Skye Stansbury; five great grandchildren, Ethan, Grant, and Carson Koester, Natalie McIntire, and Ava Stansbury; and four stepchildren, Jay (and Deanna) Dumesnil, Gayle (and Howard) LeMaire, Kurt (and Shelley) Dumesnil, and Charles (and Patricia) Landrum. Family and friends will dearly miss Buddy's unfailing smile, and love. The family sincerely thanks the caregivers at Bonne Vie for the kindness and compassion provided to Buddy during his time there. Visitation for family and friends will be from 4:00 to 6:00 p.m., with a Rosary recited at 6:00 p.m., Friday, September 10, 2021 at Levingston Funeral Home in Groves. A Mass of Christian Burial will be held, Saturday, September 11, 2021, at 10:00 a.m. at Immaculate Conception-St Peter the Apostle Parish. Burial will follow at Greenlawn Memorial Park. In lieu of flowers, friends wishing to make memorial contributions may send them to: Immaculate Conception-St Peter the Apostle Parish, 6250 Washington Blvd, Groves, TX 77619, the Cure Alzheimer's Fund (www.curealz.org), or to a charity of choice.

Roland "Buddy" Cyril Stansbury passed away peacefully on Sept. 3, 2021. He was 89. Buddy was born Oct. 1, 1931, to Roland Cyrille and Leonie Stansbury in Port Arthur. He graduated from Bishop Byrne High School in 1949. In 1953, he was part... View Obituary & Service Information

The family of Roland "Buddy" Cyril Stansbury created this Life Tributes page to make it easy to share your memories.

Send flowers to the Stansbury family.