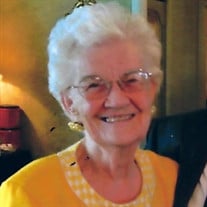 Rosemary W. Brau, 96, of Dripping Springs, Texas passed away on Thursday, January 20, 2022, at Baylor Scott and White Medical Center in Lakeway, Texas. A graveside service will be held at 2:00 p.m., Wednesday, January 26, 2022, at Greenlawn Memorial Park in Groves under the direction of Levingston Funeral Home in Groves. Born in Woodville, Texas, on February 13, 1925, she was the daughter of Arthur Woolley and Viola Riley Woolley. Rosemary was a longtime area resident of Groves and was a member of First Methodist Church of Groves. She formally worked as a Supervisor at Bell Telephone Company. Rosemary’s husband was a leading expert in the manufacture of polyester yarn and she accompanied him around the world during his career. She was preceded in death by her husband, Clarence Max Brau. Rosemary is survived by Mark L. Domingue and his wife Jerry Lynne, James Larry Domingue, Marian Domingue, Lindley Gentile and husband Chase, Elizabeth Landry and husband Andrew, Elise Boll and husband Jesse, Lila Jean Curnutt, Debbie Hutchins and husband Randy and Wilbert Lee Brau. Friends wishing to make memorial contributions can be made to First United Methodist Church of Groves, 6501 Washington Street, Groves, Texas, 77619.

The family of Rosemary W. Brau created this Life Tributes page to make it easy to share your memories.

Send flowers to the Brau family.