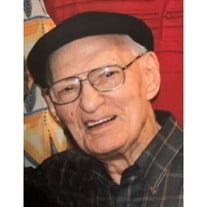 Sabery Joseph Gary, 99, of Port Neches, Texas passed away Sunday, February 21, 2021. Sabery was born March 10, 1921 in Delcambre, Louisiana to Eli Gary and Eliska Bouillion Gary. He was preceded in death by his parents, his wife, Alta Trahan Gary, 2 brothers, Maurice Gary and J.C. Gary. Surviving relatives include his daughter, Sadie Romero and husband David of Port Neches, Texas; grandchildren, Justin Romero and wife Summer of Nederland, Texas and Trey Romero and wife Leslei of Nederland, Texas; 5 great grandchildren, Payslee, Talon, Clara, and Evyn Romero and Coy Adams all of Nederland, Texas; Renette Hebert of Port Neches, Texas who was like a daughter and a host of nieces and nephews. Sabery moved to Port Arthur, Texas in the 1940's. He was employed by Texaco Refinery as a contractor for a short time and then became owner of the Little Bee Café next to the Texaco Refinery. He was a manager of a grocery store and later became owner. Sabery worked several trades of business during his lifetime. Sabery loved to raise Doves and enjoyed racing his horse at the race track. He enjoyed playing cards with family and friends. In his later years, he joined the senior citizen center and looked forward to seeing his friends each week to play bingo. Sabery was a member of St. Elizabeth Catholic Church in Port Neches. Visitation will be held Wednesday, February 24, 2021 at Levingston Funeral Home in Port Neches from 10:30 a.m. until 1:30 p.m. with a Rosary to begin at 12:00 p.m. A Mass of Christian Burial will follow at 1:30 p.m. at St. Elizabeth Catholic Church in Port Neches with Reverend Shane Baxter officiating. Entombment will be at Greenlawn Memorial Park. Pallbearers are Justin Romero, Trey Romero, Drake Romero, Bryan Marquardt, and Rus Hebert. Honorary pallbearers are Lee Kiamar and Jacob Vernon. A special thanks to his nurse, Cathy Golke, Harbor Hospice Staff, and his provider Christine Rogers. A special thank you to Agnes Cormier for being his bingo friend. Sabery loved his family and enjoyed the many years God blessed him with.

Sabery Joseph Gary, 99, of Port Neches, Texas passed away Sunday, February 21, 2021. Sabery was born March 10, 1921 in Delcambre, Louisiana to Eli Gary and Eliska Bouillion Gary. He was preceded in death by his parents, his wife, Alta... View Obituary & Service Information

The family of Sabery Joseph Gary created this Life Tributes page to make it easy to share your memories.

Send flowers to the Gary family.