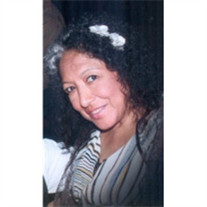 Sara Cuevas Colin, 58, of Port Arthur, Texas passed away Tuesday, January 28, 2020 at the Medical Center of Southeast Texas. Sara was born April 13, 1961 in Monterrey, Mexico. She was a resident of Port Arthur for 38 years and a member of Iglesia... View Obituary & Service Information

The family of Sara Cuevas Colin created this Life Tributes page to make it easy to share your memories.

Send flowers to the Colin family.