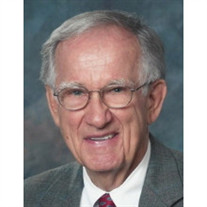 Stanley "Si" I. Freeman, Jr. was born January 18, 1931 in White Fish Bay, Wisconsin to Stanley I. Freeman, Sr., and Ava Myers Freeman. He passed away July 14, 2020 at Evergreen Cottages - Jasmin in Katy, Texas, a Wonderful memory care facility. Dads father was a traveling salesman and his family moved several times before settling in South Oak Cliff, a beautiful suburb near downtown Dallas, Texas where he was baptized in the Baptist Church. Dad graduated in 1948 from Adamson High School. We enjoyed hearing stories of him growing up in Dallas. He loved riding his 1948 Indian motorcycle around town. After high school, Dad proudly served his Country with the US Navy aboard the USS Merrick, AKA97, during the Korean conflict. He was awarded the National Defense, United Nations, and Korean service medals. Dad had an adventurous time while in the Navy and enjoyed traveling around the world. He enjoyed sharing tales of his adventures with his grandsons, Brian and Wes, especially the time he went snow skiing in Japan! After receiving his Honorable Discharge from the Navy, Dad moved to Lake Charles, Louisiana and began working for Baker Oil Tools. While in Lake Charles, he met the red-haired, green-eyed beauty, Janell, who would soon become his wife! Mom and Dad were married December 7, 1954, until Moms untimely passing in 2010. Dad moved his family to Port Neches in 1958 to start work at Neches Butane Products where he worked until he retired in 1993. Si was a member of the Nederland Masonic Lodge No.1368 for more than 50 years, as was his father. Si was a very unique individual. He was sharp as a whip, could fix anything and had a very logical mind. He loved sharing his advice and wisdom! Dad was a straight-shooter and you always knew where you stood with him. We are all better for having benefited from Dads knowledge, teaching and strong will. Above all, Dad loved his wife, children, son-in-law and especially his grandchildren whom he was very proud of. His great-grandchild is due soon and we had high hopes that they would have a chance to meet. Dad also loved the Dallas Cowboys, the PN-G Indians, cats, cigars, bass fishing, and camping. We were fortunate to be able to travel to many different states (usually where it was cooler) on annual family vacations. Dads wife, Janell Barrington Freeman and son, Stanley I. Freeman, III "Sonny" predeceased him. Left to cherish his memories are his daughter, Janice and husband, Steve Merck, grandsons, Brian and wife, Stephanie Merck, and Wesley Merck all of Katy, Texas. Visitation for family and friends will begin at 1:00 p.m., Friday, July 17, 2020 at Levingston Funeral Home, 2001 Nall Street, in Port Neches followed by the funeral service at 2:00 p.m. with Deacon Ivan Watson officiating. Entombment with full Military Honors will follow at Oak Bluff Memorial Park, 101 Block Street, in Port Neches. Special thanks for the loving care that was provided by the wonderful care givers at Evergreen Cottages and also the hospice care providers from Amed Hospice. Dad certainly made an impression on the staff. He made them laugh and kept them on their toes! Dad was loved and respected by many and will be missed greatly.

The family of Stanley "Si" Freeman, Jr. created this Life Tributes page to make it easy to share your memories.