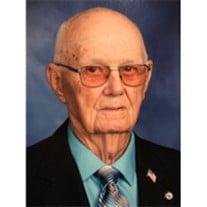 The greatest generation lost one of its own on May 9, 2020 when Thomas T. Brooks, Sr. went home to be with the Lord. Tom was born on September 17, 1924 to Zack and Elizabeth Brooks in Knight, Louisiana. After graduating high school, he joined the Army and served in the European Theatre of World War II, including the Battle of the Bulge. After his return stateside he made his way to Port Arthur and eventually found work at Gulf Oil Refinery. In 1949 he married the former Betty Shoalmire and settled in the Groves where they remained until 1971 when they moved to Bridge City. While Tom invested 36 years working for Gulf he spent his life investing in family and friends. These included Betty until her death in 2014. Three children Sheila (Brooks) Keeler and husband Mike, Thomas Brooks, Jr., and Zack Brooks who passed away in 2009, brothers, in-laws, nieces, nephews, grandchildren: Mitch Keeler and wife Jamie, Brooke(Keeler) Rousch and husband Ryan, Sadie Brooks and Taylor Keeler; great-grandchildren: Avalyn and Jude Keeler, Ezra and Archer Rousch, and also anyone he met and made his friend. Tom married Media Sanders in 2017 and at the time her children Glen Sanders, Carolyn and Joe Beck, Keith and Mary Ann Sander, Rick and Sherrie Sanders were added to his family. Tom and Media continued to reach out and interact with as many people as possible. Tom was also a servant. He was a 60 plus year member of Groves Masonic Lodge, served on the Bridge City ISD Board of Trustees, and served as Deacon at Second Baptist Church. This was all part of his desire to share with others and leave things better than he found them. For those left behind we feel we have suffered a great loss, but we are thankful for God sharing the life of Thomas T. Brooks, Sr. with us. Our family wishes to express its gratitude for your thoughts, prayers, and actions that helped carry us through this difficult time. A visitation for family and friends will begin at 1:00 p.m., Wednesday May 13, 2020 at Old First Baptist Church of Orange, 7925 I-10, Orange, Texas followed by the funeral service at 2:00 p.m. with Dr. Keith Myers and Reverend Mike Anderson officiating. Burial will be at Hillcrest Memorial Garden under the direction of Levingston Funeral Home in Groves.

The greatest generation lost one of its own on May 9, 2020 when Thomas T. Brooks, Sr. went home to be with the Lord. Tom was born on September 17, 1924 to Zack and Elizabeth Brooks in Knight, Louisiana. After graduating high school, he joined... View Obituary & Service Information

The family of Thomas T. Brooks created this Life Tributes page to make it easy to share your memories.

Send flowers to the Brooks family.