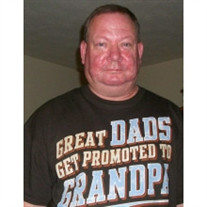 Timothy "Tim" Morris McCroskey, 59, of Port Arthur, Texas passed away Tuesday, October 13, 2020 at his home. He was born September 21, 1961 in Fort Lee, Virginia to John McCroskey and Barbara Ann Guidry McCroskey. Tim was a big history buff, he enjoyed collecting coins and studying genealogy, but most of all Tim adored his granddaughter, Jazmine. He had lived in this area for 25 years and was employed as a security guard with Securitas with over 20 years of service. He is survived by his son, Tyler McCroskey of Porter, Texas, father, John McCroskey and wife Joy of Cold Springs, Texas, mother, Barbara Ann Guidry of Point Blank, Texas, brothers, John McCroskey, Jr. and wife Kim of Onalaska, Texas and Cliff McCroskey and wife Christina of Thibodeaux, Louisiana, sister, Jennifer Matte and husband Jeff of Spring, Texas, one granddaughter, Jazmine McCroskey, Jazmine's mother, Cynthia Fayomi and a host of nieces and nephews. Tim was preceded in death by his wife of 32 years, Jackie McCroskey. A visitation for family and friends will be Saturday, November 21, 2020 from 2:00 p.m.-5:00 p.m. at Levingston Funeral Home in Groves, Texas.

The family of Timothy "Tim" Morris McCroskey created this Life Tributes page to make it easy to share your memories.

Send flowers to the McCroskey family.