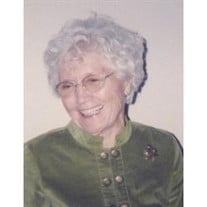 Yvonne Sutherlin passed away peacefully on August 3, 2020. Jewell Yvonne Aaron Sutherlin was born on October 5, 1930 in Port Arthur, Texas and was a lifelong resident. She was preceded in death by her parents, Mary S. Aaron and Jewell C. Aaron; her younger sister, Shirley Faye Williams; her loving husband of 55 years James E. Sutherlin; and her son James A. Sutherlin. She graduated from Thomas Jefferson High School in 1949. Yvonne later graduated from Lamar University with an Associate's degree in Paralegal Studies. She retired from the City of Port Arthur in 1992 with 31 years of public service as an Administrative Assistant. She was an active member of the First Christian Church in which she held numerous volunteer positions, including historian and librarian. Yvonne was an enthusiastic supporter of her hometown and participated in many civic and charitable organizations: Port Arthur TAMU Mother's Club; as an officer in the D.A.R. and P.E.O.; as a volunteer at St. Mary's Hospital; board of the Friends of the Port Arthur Public Library; member of the Southeast Texas Genealogical Society; and board member of the Museum of the Gulf Coast. She shared a deep interest in genealogy with her extended family and friends. She was very proud of her efforts to set up the Port Arthur Public Library's historical photos archive. As past Chair of the Jefferson County Historical Commission and of the Port Arthur Historical Society she prepared data and filed applications with the Texas State Historical Commission for approval of several historical markers under the National Register of Historic Places. Many of her projects were for the benefit of Lamar State College, Port Arthur. She was honored to play a significant role in the compilation of Port Arthur Centennial History 1898-1998. But perhaps Yvonne was best known for always having a fresh batch of chocolate chip cookies ready to share with anyone who crossed her path. She was an accomplished seamstress and gardener, loved playing her piano, and accumulated many memories travelling with friends and family. She is survived by daughter Beth Anne Sutherlin Coakley (Ron) of Bedford, TX, daughter in law Lynne Lange, son David Franklin Sutherlin (Annie) of Tyler, TX, four grandchildren; Lynn Coakley Jones (Andy), Aaron James Sutherlin (Molly), Erin Coakley Silmon (Keith), Kendall Paul Sutherlin; and 6 great-grandchildren, Haley, Avery, Nate, Ellis, Harper, and Levi. The family would like to thank the caring staff of Heritage House, specifically her nurse of four years, Rochika Jenkins, and Heart of Texas Hospice for years of compassionate attention. In lieu of flowers, memorial donations can be made to the Museum of the Gulf Coast, 700 Procter Street, Port Arthur, Texas 77640 or Friends of the Port Arthur Public Library, 3601 Cultural Center Drive, Port Arthur, Texas 77640. A visitation for family and friends will begin at 10:00 a.m., Friday, August 14, 2020 at First Christian Church in Port Arthur with a memorial service to follow at 11:00 a.m. Burial will be in Greenlawn Memorial Park.

Yvonne Sutherlin passed away peacefully on August 3, 2020. Jewell Yvonne Aaron Sutherlin was born on October 5, 1930 in Port Arthur, Texas and was a lifelong resident. She was preceded in death by her parents, Mary S. Aaron and Jewell C. Aaron;... View Obituary & Service Information

The family of Yvonne Sutherlin created this Life Tributes page to make it easy to share your memories.

Send flowers to the Sutherlin family.